Dyrhoff Limited is celebrating fifteen years of successful operation from its base in Folkestone, Kent.

Recognised globally as one of the leaders in the rubber dam and pneumatic gate field, Dyrhoff Ltd has, since 2005, designed, supplied and supervised the installation of 136 rubber dams and spillway gates, across 87 sites in 29 countries across Europe, the Americas, Asia and Africa. In addition, Dyrhoff Ltd is currently working on a further 28 projects for completion in the next three years.

Dyrhoff AS began its association with rubber dams in 1989 as the Scandinavian agent for Sumitomo Electric. At the time the Japanese company was the leading manufacturer and supplier of rubber dams in the world. In 2003, Sumitomo granted Dyrhoff a worldwide licence to sell rubber dams to the Sumitomo design. Dyrhoff Ltd was established in June 2005 to develop this side of the business.

Whilst taking its technical knowhow from the Japanese specialist, Dyrhoff Ltd developed partnerships with suppliers around the world, enabling it to respond to very specific client requirements and remain competitive in this ever-evolving market.

In parallel to its burgeoning rubber dam activities, in 1997 Dyrhoff became the European Agent for Obermeyer Hydro Inc., an American manufacturer of pneumatic spillway gates, supplying the first European Obermeyer spillway gate for the Denkpal Flood Diversion project in Hungary in the same year. This activity was also further developed by Dyrhoff Ltd from 2005 on.

Rubber dams were first thought of as a concept in the 1930s, but it wasn’t until the 1950s when the first rubber dams were constructed by Norman Imbertson of the Los Angeles Department of Water and Power. The idea of using a sealed rubber body attached to a concrete foundation which could be raised or lowered by the addition or removal of air or water proved highly effective, as well as economical. Nowadays rubber dams are a relatively common sight in the US and Asia. Today’s technology enables rubber dams to reach heights of up to 8m, with single spans measuring up to 100 meters in length. As in the 1950s, their relatively low build cost, low environmental impact – they require practicality no maintenance – and long life, make them an attractive solution. 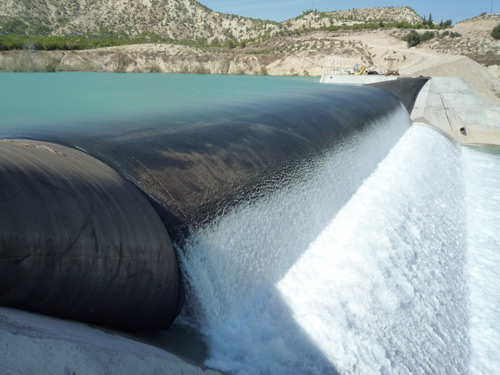 The Obermeyer gate was developed in the US in the late 1980s, as a bottom hinged, pneumatically inflated spillway gate. Its popularity has grown around the world, particularly in the small hydropower sector, where its ability to control upstream water flow with great precision makes it ideally suited. In addition, Obermeyer pneumatic gates are a popular solution for navigation applications, especially in urban environments where their low visual impact makes them an attractive solution. As with rubber dams, Obermeyer gates are increasingly being selected for flood defence projects.

As one of the world leaders in this highly specialised engineering field, Dyrhoff Ltd now employs a team of ten at its headquarters in Folkestone’s Shearway Business Park, and maintains a sales office in the USA. Among the many projects in the company’s history, supplying five pneumatic spillway gates as part of the UK Environment Agency’s Leeds Flood Alleviation scheme remains one of the highlights.

A number of projects are in development at any given time, ranging from small rubber dams for urban water treatment projects, to multiple span hydroelectric dams on large rivers. Among the projects Dyrhoff Ltd looks forward to completing in the next 36 months are hydropower projects in the USA, Canada, Portugal, Guatemala, Norway, the UK and Italy, irrigation projects in the USA and Africa, and a flagship tidal barrier project in Dubai, part of the 2020 Universal Expo (now to be hosted in 2021-22), as well as the modernisation of several weirs on the Belgian waterways.

Dyrhoff looks forward to the next fifteen years, and continues to develop its range of products to suit a growing number of applications. To view a comprehensive list of completed Dyrhoff projects, please click here.