Dyrhoff have had a busy twelve months in Canada, supplying no fewer than seven rubber dams in the country this year. Four rubber dams were installed as part of the Donnacona hydropower plant in Quebec, located on the Jacques Cartier River near the towns of Donnacona and Cap Santé. The Donnacona rubber dam replaces the old wooden dam at the site, originally built in 1918, after it suffered major damage in May 2014. After careful consideration, owners Algonquin Power & Utilities Corp., working with consultants WSP, opted to install an air inflated rubber dam in its place. 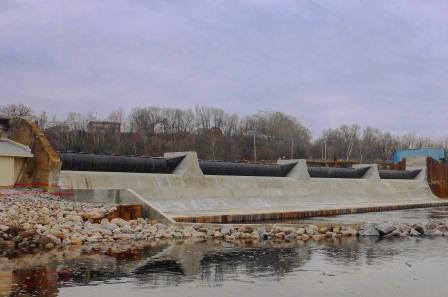 The new Donnacona rubber dam comprises four spans, each measuring 1.95m high x 23m wide. The inflatable dam will provide water level management for the Donnacona dam and nearby hydropower plant. The rubber dam will normally be operated in the fully inflated position for normal upstream water level control, and will start deflating once the headpond reaches a pre-determined upstream water level, allowing flood water to pass through and preventing flooding upstream. In addition, the dam will make it possible to pass the run-off from very large storms without flood danger, by deflating/opening one or more of the rubber bladders until the upstream reservoir water level has receded to an acceptable level. Dyrhoff has designed the dam for frequent and regular operation, and it is expected that each span will be deflated on average about 5 to 10 times a year, due to high upstream water levels. The inflatable dam has been designed to fully deflate or deflate in under 45 minutes. Following completion of the civil works by contractors Pomerleau, installation of the rubber dam took less than twenty days, under supervision of Dyrhoff. Initial commissioning tests took place in November and the dam is expected to enter operation in the New Year, with energy production at the 4.8MW plant resuming shortly thereafter.